IMCW Introduces New Board of Directors 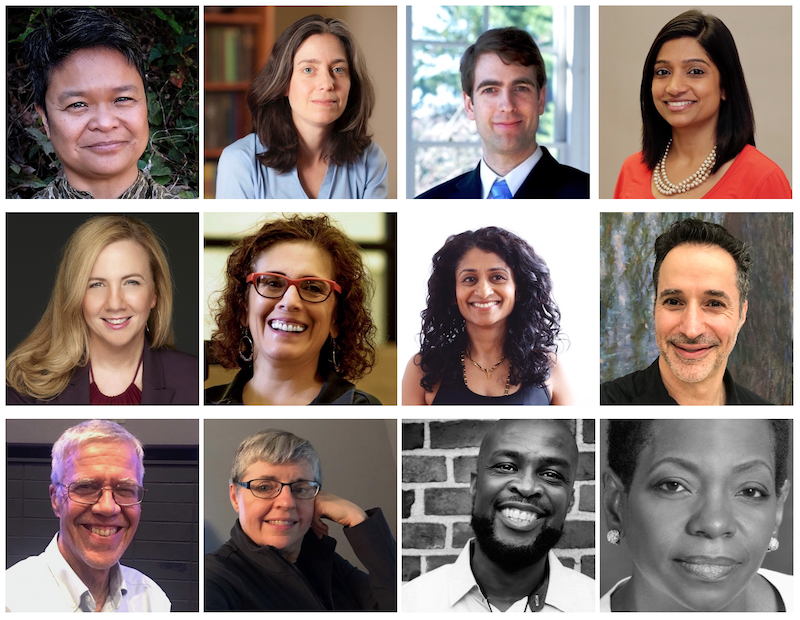 IMCW’s new board of directors has been busily preparing for its first meeting this month. Its goals for the coming year are to work on the next phase of the long-term  visioning process begun in 2018, and to continue developing and supporting a more diverse sangha here at IMCW, including teachers, board, staff and community members.

To that end, we are pleased to announce our new board:

La Sarmiento (they/them), is the new board president, and continues to be the guiding teacher for the IMCW People of Color and LGBTQIA+ Sanghas. They completed the Spirit Rock Community Dharma Leader Training in 2012 and teach retreats around the country. As an immigrant, non-binary, Filipinx-American, La is committed to creating access to and sharing teachings and practices that alleviate suffering, cultivate true happiness, and support the liberation of all beings.

Elena Baylis, new vice president, is a member of the Center for Mindful Living sangha. Her focus is on the benefits of daily meditation practice and integrating mindfulness into everyday life. Professionally, Elena is an associate professor at the University of Pittsburgh School of Law and holds a joint appointment with the Graduate School of Public and International Affairs at the University of Pittsburgh. She writes about post-conflict justice and international law.

Paul Beaton continues as board treasurer. He began his formal meditation practice in 2013 through one of IMCW’s neighborhood classes and began a yoga-based mindfulness of body practice in 2006. He works in finance law and policy at the University of Melbourne, doing research and analysis of climate change risk to financial markets and systems. He has served as a study director with the National Academy of Sciences Board on Science, Technology, and Economic Policy.

Mallika Subramaniam, new board secretary, grew up in India, dabbling in different types of meditative / contemplative practices. In 2015, she stumbled into an IMCW-weekly drop-in class and hasn’t looked back since. Through IMCW, she has attended various retreats and year-long programs including the Year of Living Mindfully with Jonathan Foust. She mentors with the IMCW Mentoring program. She works as project manager for HITT Contracting on project execution, occupancy and close-out.

Laurie Cameron has been a student of Zen Master Thich Nhat Hanh for over twenty years, Laurie is a Senior Mindfulness Teacher at the Search Inside Yourself Leadership Institute born at Google, a certified meditation teacher with Tara Brach and Jack Kornfield’s two-year program, and a professor of Mindful Leadership at the R. H. Smith School of Business at the University of Maryland.

Silvia Garcia-Pereira graduated from the Year of Living Mindfully program in 2009 and in 2013 graduated from the Meditation Teacher Training Institute’s two-year program. That year, she also received a .b mindfulness in schools teacher certification. She completed the Advance Practitioners Program at Spirit Rock Meditation Center, and has been an IMCW affiliate teacher for several years. Silvia holds an MFA in film and television from NYU and works as a video producer for Montgomery County Public Schools.

Anna Johns grew up in India, where yoga and mindfulness practices were an integral part of life. She moved to Hong Kong where she was drawn to the practices and began her training with Indian Master, Kamal Srinivas in 2001, followed by extensive training in the U.S. including Duke University’s Therapeutic Yoga and the 2-year Mindfulness Meditation Certification Program. She is an IMCW affiliate teacher and a co-founder of IMCW’s Asian Sangha.

Fred Persi began teaching mindfulness meditation classes to families and children in 2012. Recently he began teaching to children and adults in high risk communities and to 12-step groups. Fred completed Year of Living Mindfully program in 2010 and graduated from The Meditation Teacher Training Institute’s two-year program in 2013. Fred is an entrepreneur who has founded and managed several companies

Stig Regli has practiced Vipassana meditation since 1984 and facilitated sitting groups and classes since 1997. He was introduced to the practice in Thailand in accordance with the teachings of the Burmese Mahasi Sayadaw tradition. His primary teacher has been Tara Brach. Stig served as IMCW’s first board vice president. In 2008 he completed the three-year Community Dharma Leadership program sponsored by the Spirit Rock Meditation Center. He works as a policy advisor for the Federal government.

Susan Salek is a longtime member of the LGBTQIA+ sangha and is committed to holding space and creating opportunities for the queer community on this path. In 2019, Susan graduated from the Mindfulness Meditation Teacher program. Susan is currently enrolled in the Buddhist Chaplaincy Program at Upaya Zen Center where she is studying altruistic and compassionate service by integrating spiritual practice with social action.

Travis Spencer, Executive Director at Institute of African American Mindfulness, has been a mindfulness trainer for Minds, Inc, and a behavioral health counselor for API Associates, Inc. He has an M.A. in counseling from Trinity University in Washington, DC. Travis began his Buddhist practice in 2008 and strives to be an agent of change in our community. Travis is a lifelong learner, and wants to promote diversity, wellness and holistic care in our communities.

Valca Valentine is a public engagement strategist and former journalist developing and leading communications programs for a variety of government, corporate and non-profit organizations. From 1994 to 2012 she oversaw program and public affairs as director of communications within the DC Mayor’s Executive Office, was senior associate at Ogilvy Public Relations Worldwide, and strategic communications contract manager for the Veterans Health Administration and most recently, senior technical editor for General Dynamics Information Technology. Her roles included management of cross-functional teams, public awareness campaign development and relationship management strategies. A co-founder of Mindful Living in DC, Valca is a 2019 graduate of the two-year Mindfulness Meditation Teacher Certification Program for Teaching Awareness and Compassion-Based.

Full biographies can be found at the About Us/Board page.

We are grateful for your dana (generosity)

Our weekly newsletter includes exclusive articles and videos from our teachers and news of upcoming events.

Our weekly newsletter includes exclusive articles and videos from our teachers and news of upcoming events.